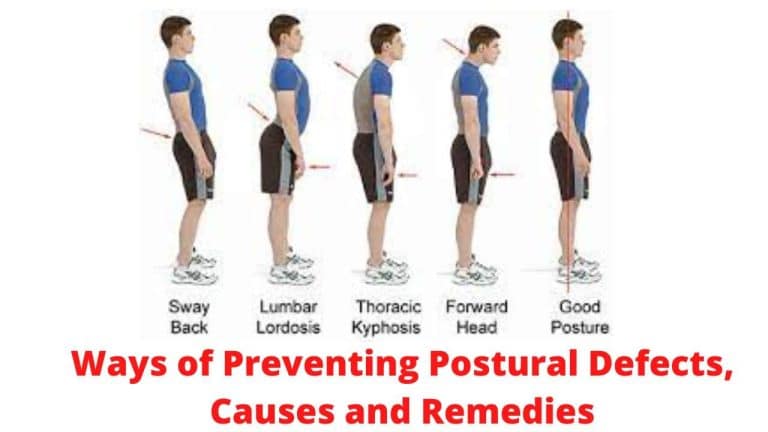 There are different approaches to avoiding postural defects, as well as causes and treatments. Even when people are aware of the harmful impacts of poor posture, a significant proportion of people choose not to make changes to the aspects of their lives that are the root cause of these postural defects, many are not away of the causes, and remedies, and neither ways of preventing it, read this article if you want to learn more about postural defects.

What exactly does "postural defects" mean?

A postural defect is defined as when our spine is positioned in unnatural postures, in which the curves are accentuated, and as a consequence, the joints, muscles, and vertebrae are placed in stressful situations. This can lead to pain and discomfort in the body. Because of this prolonged lack of proper posture, a pressure buildup has occurred on these issues.

A person has a forward head posture when their head is positioned in such a way that their ears are in front of the vertical midline of their body. Your ears and your shoulders should be aligned with the vertical centerline of your body if your body is in alignment.

There are a few other names for forwarding head position, including nerd neck, text neck, and tech neck. It is commonly caused by hunching over a cell phone, computer, or driving wheel for long periods of time, especially if you drive a lot.

The natural process of aging can also cause this condition by causing a loss of muscular strength in the upper body.

Swayback is a condition that occurs when your hips and pelvis tilt forward, in front of your body's midline. This condition is also known as lordosis or hyperlordosis.

Because of the way you are positioned, the natural curvature in your lower back has been exacerbated. Because both your stomach and your rear end are protruding when you stand, you give the impression that you are slouching backward.

If you sit for long periods of time, the muscles in your back might get tense, which can lead to swayback. Your abdominal muscles and glutes may become more susceptible to atrophy if you sit for extended periods of time. In either scenario, the core muscles that are responsible for stabilizing your back will atrophy.

Other potential causes include being overweight, experiencing an injury, having a neuromuscular problem, or having abnormalities in your spine or vertebrae.

Kyphosis is characterized by an abnormally large curve in the upper back (also known as the thoracic spine), which results in the shoulders being rounded forward. Hunchback is another name for this condition.

As you become older, your spinal bones become weaker, which can cause osteoporosis, also known as bone thinning. This can cause your shoulders to round. It is commonly observed in ladies of advanced age. Degeneration of your spinal disks or vertebrae can also be another cause of back pain associated with aging.

Younger people are more likely to acquire kyphosis as a consequence of infections, disorders such as polio or Scheuermann's disease, or treatments for cancer such as chemotherapy or radiation.

A condition known as flatback occurs when the typical curve in the bottom part of your spine loses some of its curvatures. Even though you have a hunched forward posture, your lower back seems to be straight.

It is possible for it to be present at birth; however, it can also be the outcome of some types of back surgery or degenerative disorders of the spine. Some examples of these conditions are ankylosing spondylitis (inflammatory arthritis), disc degeneration, and vertebrae compression.

Standing for extended periods of time can be very unpleasant for people who suffer from flatback.

If you are seated in a chair that is too low, bend forward to see your screen, or stare up at a screen that is set too high, you may find that your chin protrudes forward as a result of these activities.

Causes Of Postural Dysfunction And their Contributing Factors

Factors that contribute to postural defects.

Treatment via Physiotherapy for Posture Defects

The treatment provided by physiotherapy may be of substantial assistance in reducing or even eliminating postural problems. After having their posture adjusted, the vast majority of patients report that they have less discomfort.

How to Improve Your Posture and What Treatments Are Available

There are occasions when the "cure" is straightforward:

Other general improvements include the following:

The most effective posture for preserving energy and avoiding strain on any of the body's muscle groups is one in which the spine is correctly aligned and in which the ears are brought into alignment with the body's midline.

But it's not hard to get into the habit of slouching, particularly for those whose jobs require them to be hunched over a desk all day or who spend long periods of time staring at their phones.

The natural process of aging can cause a decrease in bone density as well as difficulties with posture because some muscle groups lose their capacity to provide support.

All improper postures require shifting the spine out of the neutral alignment position it normally maintains. A frequent example of poor posture is holding one's head forward. There are also styles known as swayback and flatback.

Stopping bad habits and beginning stretching and strengthening exercises that focus on shoring up support muscles that are lacking are the two most important steps in correcting most posture issues.