Tretinoin Purging: Everything you should know 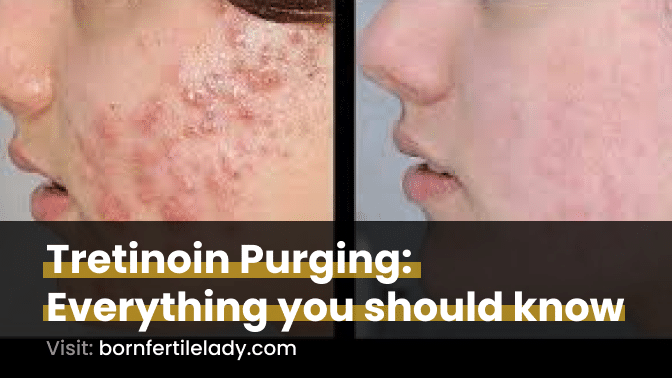 When it comes to treating problematic skin issues, tretinoin has quickly become the gold standard. The proper use of tretinoin may have long-lasting, transforming benefits on a variety of skin conditions, from severe acne to ageing indications.

However, your skin could go through a procedure known colloquially as the "tretinoin purge" or the "retinoid purge" before you can benefit from tretinoin.

In this post, we'll go step-by-step through the tretinoin purge procedure and discuss some best practices for doing it successfully.

The goal is to get fantastic, long-lasting effects, which is worth it when using a potent wrinkle- and acne-fighter like tretinoin.

What is tretinoin purging?

Using Tretinoin may result in the dreaded "Tretinoin Purge," which causes an increase in acne outbreaks, redness, skin irritation, and peeling. Tretinoin abuse is usually to blame, therefore I'm going to demonstrate to you precisely how to employ this component of Tretinoin purge recommendations to entirely prevent any adverse effects.

Tretinoin: What is it?

A prescription drug called tretinoin, also known by the trade name Retin-A, is used to treat acne, fine lines, wrinkles, sagging skin, and dark spots. Although the first tretinoin product to get FDA approval was Retin-A, the drug is now also available as a generic and is more often referred to as tretinoin than Retin-A.

Tretinoin belongs to the family of chemicals known as retinoids, which includes both synthetic and naturally occurring forms of vitamin A. While they all do the same task essentially, they each operate somewhat differently and to varying degrees.

The main distinction between retinol and tretinoin is as follows. Unlike retinol, which has to be transformed into retinoic acid by skin enzymes, tretinoin is a concentrated version of pure retinoic acid that begins working right away, particularly for treating acne.

You can understand why you'd like to give your skin retinoic acid rather than something that requires a few steps to get there given that all of these drugs act on the retinoic acid receptor.

But there is a problem. Because tretinoin is a retinoic acid, it may initially cause transient redness, itching, and peeling. The tretinoin purge is that.

Tretinoin and other retinoids function in two ways to assist the body:

It accelerates skin cell turnover and avoids pore congestion, which may cause acne, blackheads, and other skin issues. Since more new skin cells are produced in less time due to accelerated cell turnover, the majority of individuals experience much fewer acne outbreaks and blackhead frequency.

Even while tretinoin is quite successful in treating wrinkles and acne over the long run, for some new patients, the first few weeks might be difficult.

During the initial application of tretinoin, some individuals may experience a "purge," in which their skin condition temporarily worsens before improving. Or, they could feel unpleasant redness, dryness, or irritation.

The purge might make users feel as if they made a mistake because of these issues, which can include breakouts and the odd whitehead.

Dear buddy, be patient! Science has repeatedly shown that this therapy is effective; all it takes is a little amount of persistence to be successful.

What precisely is going on and why does tretinoin aggravate the same illness it is meant to treat?

A little bit of a misnomer is the word "purge." It's alluring to think that your skin needs to get rid of the debris, germs, dead skin cells, and oil that may be obstructing your pores. But it's not only purging itself of these chemicals in the conventional sense.

The skin is changing and becoming ready during this brief period to support the new medication's effective use. Keep in mind that your skin is experiencing a faster-than-usual cell turnover.

All of the chemicals that were obstructing your pores are forced to the skin's surface layer, and because everything is moving more quickly, you could suffer minor irritation, which helps to trigger breakouts.

Frustrating? I have no doubts. anticipated and essential? Absolutely. You could have breakouts in regular places, but you also might develop new spots or more or fewer pimples than usual.

Even if you don't often have acne or breakouts, skin purging may happen if you're taking tretinoin to address the symptoms of age. Once again, have confidence in science and anticipate having skin that looks younger.

What Time Does the Purge Begin?

The tretinoin purge will likely begin shortly after your first treatment, often within the first two weeks. The timetable, however, may change. Skin purging might take weeks for some individuals, depending on a variety of variables, including your skin type, your skin condition, and the potency of the retinoid or tretinoin you're taking.

Retinol, for instance, is a mild retinoid for the majority of individuals. Because of this, it is found in over-the-counter cosmetic products even though tretinoin works far better. Retinol, which is inactive, must be transformed into retinoic acid at the skin's surface. About 20 times as potent as retinol is tretinoin!

You could have good and terrible days while the tretinoin is being adjusted, as with many skin treatments. When you think the purging is through, another wave hits and your skin begins to erupt once again. If you go through this, don't be alarmed; it's all a part of the process and, as before, it differs from person to person.

Keep in mind that your tretinoin is doing precisely as it was intended to, whether you feel the purge all at once or in waves.

How to Survive the Purge

Even while you may not be able to completely escape the purge, there are certain things you can do to make it a bit more bearable.

Expect the purge and accept it

By being ready for the purge, you'll be able to deal with it when it occurs and celebrate if you're one of the fortunate ones to make it through the adjustment period without experiencing a breakout. Instead of becoming concerned with each new feeling (stress may often lead to breakouts), consider each zit as evidence that the procedure is effective.

While the tretinoin process cannot be stopped if you want it to work, you may contribute to making it less painful. You may lessen the negative effects and the effect on your skin by beginning gradually at a low strength or with every other-day treatment. As your skin adjusts, you may increase your tretinoin use to once every two to three days or perhaps daily.

Naturally, this implies that the first time you use it, you may not get as spectacular benefits, but you can gradually increase the dosage to see even greater ones. In fact, if you wish to use a stronger application, your doctor could advise starting with a lesser dosage or discussing the potential adverse effects.

Niacinamide-containing products may be added to assist lessen the effects of the purge.

Niacinamide may work exceptionally well with tretinoin since it brightens the skin and reduces irritation. When utilizing niacinamide, many individuals see an instant improvement in their skin tone.

The negative effects of the tretinoin purge might also be exacerbated by touching your face or by allowing oil or germs to accumulate. Let your skin take care of itself and only touch your face with clean hands. Don't pick at flaky or dry skin that has developed as a result of the purging. Over time, the dryness will disappear.

Take pictures before, during, and after.

Do you actually see your face when you look in the mirror every day? Consider taking pictures before, during, and after the purge if you're starting to lose motivation. You'll see that although these changes may first seem little, they are nevertheless taking place. Once again, talk to your prescriber if you don't see any gains within 3 months. The development that you may not be able to perceive for yourself will also be visible to your doctor thanks to photos.

The tretinoin purge's most crucial lesson is that it's necessary for getting clean, radiant, and young skin. The purging is entirely appropriate and perhaps required. You get one step closer to the complexion you want with tretinoin every day.

We assist you in making skincare prescriptions accessible online. Fighting ageing, acne, and other issues from the comfort of home are now simpler and cheaper than ever thanks to a video consultation and quick, free shipment.