Different colors of breast milk and it's significance:When to worry about each colors. 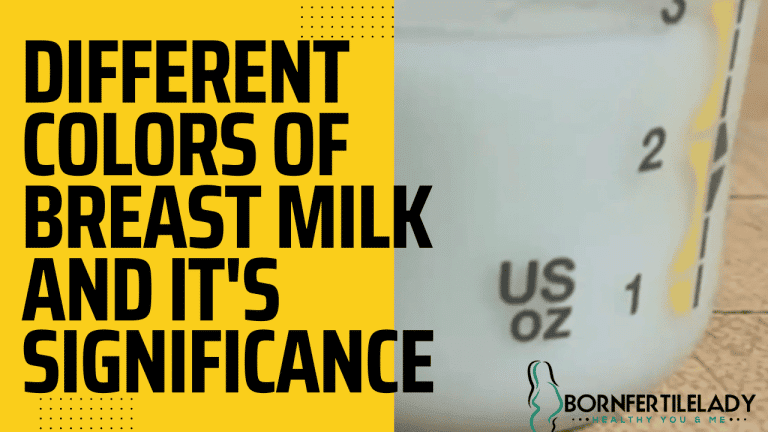 Different colors of breast milk have different significances and there is no such thing as "normal" breast milk even though most mothers who are breastfeeding have milk that is white or even light blue.

Additionally, the color will vary depending on the sort of milk you are producing.

The initial milk produced by the mammary glands, or colostrum, is often thick and yellow, however, it can also be runny and clear.

The takeaway is that, at least for the time being, it's okay if your milk isn't white.

because There is a wide spectrum of normal when it comes to the color of breast milk.

Blueish, yellow, cream, and orange are all common and secure colors of breast milk and they are all good for your baby.

Different colors of breast milk and its significances?

There are numerous variations of what is considered "normal," and every woman's milk is unique. In fact, in the first few days or weeks after giving birth, the color of your milk will vary significantly.

This is the first pre-milk to enter your baby's system after birth, it tends to be yellowish.

Between two and five days after giving birth and 10 to 14 days later, when transitional milk replaces mature milk, it may have an orange tinge.

When it matures at the end of the second postpartum week, the milk is pale or bluish, resembling watery skim milk.

Why is my Breast Milk Yellow?

Your breast milk may be yellow for a variety of reasons.

Food rich in Beta-carotene, such as carrots, squash, and sweet potatoes, can potentially change the color of your milk. When frozen, your milk could also take on new colors.

Breast milk can occasionally become rather yellow after freezing.

Why is my Breast Milk White?

Your milk will generally turn whitish when it has transitioned from colostrum and has achieved maturity or the final stage of milk production.

While mature milk is normally white, it can change colors depending on your diet and the things you eat, so it's crucial to note this.

Being slightly blue in your breast milk is also typical.

When starting to pump or nurse, a bluish color is frequently perceptible.

Since it is foremilk, it is thinner, lower in fat, and higher in electrolytes. End-of-feeding or end-of-pump milk hindmilk has a creamier white or yellowish color because it is thicker and contains more fat.

If you've ever wondered why skim milk from cows that you purchase at the grocery often has a bluish color, it's because it has less fat.

Read also: Can a Girl Get Pregnant if a Boy Touches her Breast With Mouth? 6 signs of pregnancy.

What is making my breast milk green?

If your breast milk turns green, don't panic. Recall your most recent meal.

You most likely consumed green food, such as a green smoothie or a lot of green veggies, which altered the color of your breast milk.

Don't worry, the color of your breast milk will return to normal.

But rather congratulate yourself on the back for making such excellent food choices.

Why do I have pink or brown breast milk?

Foods containing artificial food coloring, such as soda and desserts prepared with gelatin, as well as foods like beets, may be to blame.

However, a pink or brown color may also indicate that there is blood in your breast milk. Nipples that are painful and bleed easily, "rusty pipe syndrome," which is old blood in the milk ducts as a result of increased blood flow to the breasts, or benign milk duct growths known as papillomas can all contribute to this.

Pink or brown milk can also occasionally result from a breast infection called mastitis or, much less frequently, from breast cancer.

What is responsible for black breast milk?

Breast milk may appear black when taking medications like minocycline, which is okay to use while nursing for brief periods

What does breast milk with blood mean?

Although seeing blood in your milk can be unsettling, it typically isn't a serious problem.

When your body begins producing colostrum and transitional milk, it is frequently an indication of bleeding around the nipples which occurs frequently in breastfeeding mothers, or increased blood flow to the breasts and milk ducts.

Both frequently happen in the initial stages of breastfeeding.

These problems normally resolve the blood within a few days.

In rare instances, the blood may be the result of breast cancer, mastitis, or papillomas (benign growths in the milk ducts).

So consult your doctor if you see any blood.

If necessary, he or she can check your breasts and perform another test.

The perfect color of breast milk for your baby

The best nourishment for a baby can be found in each other's unique breast milk. Consult a licensed healthcare professional for advice if you have any worries about the look of your breast milk.

We are constantly amazed by breast milk. Even though you may be worn out, never lose sight of the miracle that is breast milk.

As the days pass, you'll discover that parenting is more instinctive than you could have ever thought, and you'll find strength as you become aware of the extent of what your body and mind are capable of as a mother. You can give your infant the ideal nutrition at the precise time when it is needed.

Does the color of breast milk matter? What color is healthy breastmilk? What do the different colors of breast milk mean?
Share. Facebook Twitter Pinterest LinkedIn Tumblr Email
Previous ArticleBleeding during early pregnancy:8 possible causes you did not know.
Next Article 100 most amazing names Nigerian men bear.