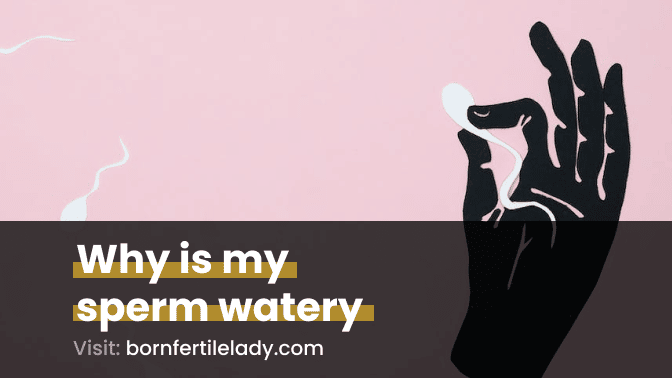 Who doesn't desire a normal and healthy sperm? Literally, everyone does. But in reality, not all men have healthy sperm. It's quite alarming many don't have an idea of how bad it is to have unhealthy sperm let alone know its causes.

Unfortunately, an unhealthy sperm indicates the person has a reduced semen quality or a low sperm count which could cause a critical health condition known as Watery sperm.

There are varying causes for unhealthy sperm. Hence, in this article, we would explore some of the possible causes of watery sperm.

Scientists discovered that sperm contains the DNA which combines with the egg's DNA to form an individual and the tip of the sperm head is the part called the acrosome which allows sperm to penetrate the egg while the midpiece contains the mitochondria playing the role of supplying energy the tail needs to move. This tail moves with whip-like movements to propel the sperm towards the egg.

The sperm of a man is white in colour and normally thick. However, it is believed that an average man produces 1500 sperm cells per second and takes about two months for each sperm to mature. It also travels in semen and half a teaspoon of semen which contains 30 million to 200 million sperm.

Even though sperm are formed in the male reproductive organ and play a vital role in fertilizing the female egg, a lot don't know the difference between a healthy sperm and what makes up an unhealthy sperm. Keep scrolling to find out the characteristics that make up both healthy and watery sperm.

Read Also: Pregnancy Vitamins – Why You Need It, What’s Safe and Unsafe

Differences between healthy and watery sperm

At times, this question may come into your mind. Is watery sperm unhealthy? You know, we said the male sperm is white in colour and has a thick texture.

Though, certain medical conditions and lifestyle factors can change the consistency and colour of sperm. Below are some of the characteristics of a watery and healthy sperm;

Have you been wondering – ‘why is my sperm watery’? Watery sperm isn't a permanent condition. It's temporary and can gradually go away on its own.

As explained earlier, there are various factors that cause watery sperm. Besides the factors of diseases, lifestyle factors can as well affect your sperm quality.

Some of the common factors that could cause watery sperm are listed below;

Oligospermia is a condition caused by low sperm count. This simply means that you have fewer sperm than usual.

Anything lower than 15 million sperm per milliliter of semen is considered abnormal. The causes of oligospermia are as follows;

Other factors causing low sperm count include; injuries, the presence of anti-sperm antibodies and retrograde ejaculation.

Ejaculation refers to the release of sperm after a man climaxes. This condition affects the quality of the sperm released. Watery semen also results in frequent ejaculation.

If you have watery sperm, observe the colour – is it yellowish, white or greyish? Clear sperm is a pre-ejaculatory fluid which is released during sexual arousal before ejaculation or foreplay.

This is another factor causing watery sperm. Scientists have proven that men who have high zinc levels can fight off the effects of anti-sperm antibodies. Hence, you are recommended to consume supplements containing zinc sulphate.

The following are some of the lifestyle choices that may influence sperm count:

If you have been experiencing watery sperm for a while, it may be disconcerting. However, it can be treated by using these few natural remedies.

Read Also: Breast Discharge - Why is my breast bringing out water?

Treatment options for watery sperm depends on the underlying cause. Seeking professional help is a good idea because doctors help to make a diagnosis through tests and find the best treatment option.

Consultation with a Specialist Doctor

Men who have watery semen should seek advice from a urologist, most especially if they experience the following symptoms:

To diagnose the cause of watery sperm, your physician will identify your symptoms, lifestyle and medical history. If there is a need, your doctor can conduct a series of physical tests.

Watery sperm does not necessarily indicate infertility. It is a temporary condition and could get better on its own.

Adopting a healthy lifestyle can help manage the problem in most cases.

We've made it clear that one factor of watery sperm which could be a sign of low sperm counts, could also occur because of poor nutrition and lifestyle choices.

Men who have a more significant understanding of what contributes to this factor are in the best position to remedy it.

However, if you continuously have watery or discoloured sperm, you should seek medical advice.

It's always best to consult your physician when the symptoms manifest, rather than trying to diagnose them yourself.

An article published by Medical News Today, states that; men who experience “persistent watery or discoloured semen should visit a doctor or urologist”.